At school, Stephanie struggled to concentrate and put it down to a lack of interest in education. After a while of attending school regularly, Stephanie decided that home education might be a better route.

Once into the swing of learning from home, Stephanie realised that she loved education and became really interested in technology. Having turned 16 this year, Stephanie applied to join our recently introduced Digital Skills & IT course at the Ilkeston Campus, and began studies last month. 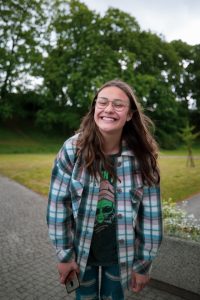 “Stephanie has settled in really well. She is already progressing on the course and producing good quality work.”

In just her first weeks at YMCA Key College, Stephanie was nominated for ‘Student of the Month’ by the tutors and support team at Ilkeston Campus for their hard work and dedication.

“I was very surprised to receive the award. If I can get it, then other students should see how much they can achieve too.”

When we asked Stephanie what her hopes were after she graduates from YMCA Key College, she said: “I want to join the army, so I’ve started my fitness training.”

We have no doubt that if Stephanie applies herself to his training in the same way she does her education she will be protecting Queen and country in no time.